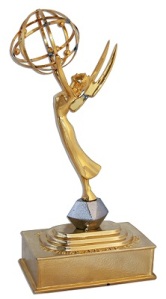 I’ve recently decided that, for the first time in years, I’m very interested in the Emmy Awards. Mind you there are MANY MANY top contenders that I haven’t seen this season/ever (Game of Thrones, Breaking Bad, Veep, Louie, and The Normal Heart are the most notable that come to mind). And the majority of the TV I do watch regularly was never in danger of being nominated (I haven’t missed an episode of the decidedly un-trendy Bones, Castle, or Criminal Minds in YEARS). But I’ve enjoyed reading the wonderful bounty of criticism about this season, and am a huge fan of The Good Wife, Fargo, OITNB, True Detective, House of Cards, etc. So what the hell, here’s my take on the upcoming Emmy nominees.
Predicted Winners will appear in bold.
My personal preferences will be italicized.
[egregiously overlooked nominees will be bracketed]

If Breaking Bad is as good as LITERALLY everyone says (and since Fargo was apparently “not a TV series”), then I guess I have to root for it.

Though I’ve heard some quibbles about the Ryan Murphy treatment, if it’s half as affecting as it was in the theater it should be unbeatable. I just don’t know that I have the strength to sit through it again.

I included Sherlock as a “shoulda been” not because I think it was “robbed” but because it’s in the wrong category (TV Movie, despite that the fact that there are three of them all continuing the same story from its previous two seasons). This whole Montessori system of “going in the category that feels right”–as opposed to objective definitions of a series vs. a miniseries vs. a movie–is ludicrous (if it does make the miniseries acting categories more fun).

Wright may win on Sunday the award she should have won last year for a far more impressive performance in House of Card’s stronger freshman season.

I was more impressed by Harrelson than McConaughey. As McConaughey’s performance in True Detective won him an Oscar for Dallas Buyer’s Club, it can probably take down Bryan Cranston (whose performance on Breaking Bad won him a Tony for All the Way).

The good news is, The Good Wife‘s major cast changes this season could mean more substantive material for Baranski’s annually underrated performance (and hopefully an Emmy win)…next year. If I watched Breaking Bad I have a feeling I would be rooting for Gunn as well.

I hope the cautiously appreciated (though rewarding) Brooklyn Nine-Nine gets recognition, and Braugher’s vital contribution certainly merits an award on the show’s behalf.

I don’t know if Sarah Paulson will ever be as good in anything again. And Tolman is a “shoulda been” because she is unquestionably the leading actress in Fargo, and I think she’s more of a stand-out here than in the supporting category to which performance is relegated.

At least the various forms of category fraud prevents Chiwetel from losing an Emmy AND an Oscar to Matthew McConaughey in the same year.

Allison Tolman is a lead actress (and in a TV Series, but I digress). If she were in the right category I would be all about Basset. Roberts has one of those incredible parts that, if done even halfway decently, should win all the awards.

As with Roberts, Matt Bomer has fantastic part to play. And he just seems so likeable. And those eyes! swoooooon. But in the most unassuming part of a series full of flashing performances, writing, and production values, Hanks consistently stood out as the highlight.