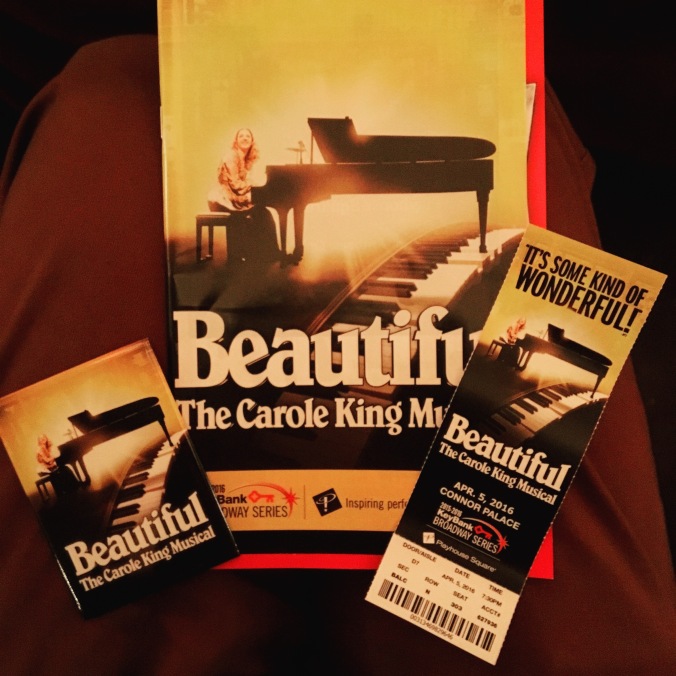 What is in the Mueller family well? Jessie was Tony-nominated Broadway debut in a revival of On a Clear Day You Can See Forever that was otherwise ignored. She won her Tony for her star-making Carole King in Beautiful: the Carole King Musical. Her sister Abby is now playing the role in the national tour, currently playing the Connor Palace, and whenever she’s on stage things are indeed beautiful.

A. Mueller’s King is intelligent, funny, sympathetic, empathetic, and relatable. And she sings real good too.  The show, directed by Marc Bruni with a book by Douglas McGrath, that surrounds her is polished and professional, if not necessarily distinct (although costume designer Alejo Vietti creates some fun period looks and a few magical quick changes).  The story is somewhat thin–Carole falls in love and becomes a successful writer. She gets divorced and records tapestry–and padded with other hits of the era under the pretext that they were written by friends of King or came out of the same office she worked in before moving to the West Coast. This glimpse into the music biz in the 1960s is not as interesting as it could be, but the baby boomers around me sure loved hearing those songs.

But the show has one clear objective–to make you like Carole King and appreciate the emotional context for Tapestry (an album the production assumes you already know and love…and let’s face it, your probably do). In this–thanks in large part to the utterly delightful Abby Mueller–it is unquestionably successful.